Easy installation. It works as well as any Byrd head I’ve used. Look good. Haven't installed any yet What more can I say. Start to finish for installing was under 2 hours.

I ordered it on a Sunday from USA and received it 9 days later! That surprised me. This is a great cutter for my Dewalt planer. Easy to install. (watch the video) Quieter, no snipe, great finish, no more blades to sharpen! Cutter is same diameter as original which is a plus.

I used the bit to create 8 drawer faces. Worked great! Sharp edges and no tearing on the end cuts. 3 Nice round over bits, great addition for my CNC machine. Thank you. Works great, wish I had bought it sooner. So much quieter and smoother finish plus noticeably easier on the machine

Was very satisfied on how quick I received my planer knives order and how I was kept informed on status of order as it was being processed and shipped. I wasn't sure what to expect, but this cutter head arrived quickly, was easy to install, and works great! So glad that I found this and didn't spend more for a Byrd or Lux!

Got this for my DeWalt DW 734. I made over 20 hard wood cutting boards so far and little snipe and silky smooth finish right from the planner. Best finish ever. Seven days from the time I ordered the cutter head it arrived at my shop. Very easy to install after watching YouTube video. I could not be any happier, for the price and quality of the product. I highly recommend this wonderful cutter head. 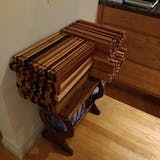 Beautiful wood! Thank you for your approval, Doug.

I received 2 row cutter head very fast. It is a 2 row helical head for dewalt 735 planer. When I first seen the 2 row my first hope was that it would take less horse power. Yes it takes less then Byrd or other heads I have tested. Second thing because of the spacing of cutters and R150 curve the lines people complaint about are not as deep and there is less of them.The head planes wood very smooth and planes poplar wood even better the any other head I have tested. I tested it with maple, red oak, walnut, and poplar. It does a great job and I can mill faster now because I can take more of a cut then with byrd 4 row 40 bits and any other head. Reason is takes less amps so It does not trip breaker as easy as the other heads. Very nice head - quality is great. The problem with a lot of wood workers think more cutters are better - not true with the 2 row head. From my test It does a better job. Thanks FINDYOU Tools for selling a great head It is the first 2 row head I ever seen. I have been doing wood work for over 30 years. Thank you, Edwin. You are a real master.

Installing the new cutterhead was more difficult and time-consuming that I anticipated but I got it done and I’m pleased with the results.

So, my inital thoughts after ordering were not good, as 99% of my experience ordering items from China are horrible, long shipping times, damaged products, wrong products, and thats if it actually arrives. However, this part arrived extremely fast, fit like a dream, and went together as expected, the instructions leave a bit to be desired but if you are buying this item I would assume you are somewhat familiar with tools and the like, so you should have an easy enough time installing. And highly recommend an assistant when reinstalling as there isn't a good way to hold the damn thing and drive it in. Also, freeze it over night and it'll shrink down a bit and make it easier to install.

The cutting head come is VERY well packed with no damage. Non of the cutting heads were installed so I didn't have to take them off to get started. It did come out of china so it took some time to get here but other then that It was everything I hoped for and works like a champ. The cut is absolutely amazing. The blades fit the scraper handle perfectly and appear to hold their edge well. So far they have no problem removing old and flaking paint from a wooden substructure. I was a little hesitant in the purchase of this. Mostly, because of the shipping from China to USA. However, it came in 9 days from order to door step. The cutterhead cuts super smooth and without vibration. Glad I bought it. Highly recommended.

Most excellent upgrade for a tired old plane, outstanding performance. You guys need to provide install advice, critical to remove break and spring.

I was not sure what I was going to get, but am absolutely astounded how well the cutterhead works in the planer. The instructions are mostly pictures, which is a lot easier to understand than the choppy English I have seen in some instructions for foreign made parts. In reality, the process is rather simple and should be able to be done in a hour if you are reasonably mechanically inclined. The most time consuming part is attaching all of the cutters to the head. I ended up using a torx bit in a driver to attach them quicker until I snapped the tip off of that bit.

When this thing runs, the planer sounds the same until you put the wood into it. It is incredibly quieter and has a much lower tone. The finished face of the lumber is like glass. I cannot believe how much of an improvement this is over the stock head.

Also shipping was so fast. I think I got this from China in less than two weeks and several days there was a shipping exception from FedEx in China. It was exceptionally well packaged and I would not hesitate to order it again.

Delivery was made on time with no issues. So far it has been awesome,very smooth finish

G
Helical Cutterhead for DeWalt DW734/DW733 12.5inch Planer Gabriel Myall
I was impressed with the quality and precision.

To say the least this cutterhead installed flawlessly and preformed. Cut way quieter and smoother. Carbide were sharp and marked professionally. The part reached me from China via FedEx in 4 days flat.

Let customers speak for us

Easy installation. It works as well as any Byrd head I’ve used.

Look good. Haven't installed any yet

What more can I say. Start to finish for installing was under 2 hours.

I ordered it on a Sunday from USA and received it 9 days later! That surprised me. This is a great cutter for my Dewalt planer. Easy to install. (watch the video) Quieter, no snipe, great finish, no more blades to sharpen! Cutter is same diameter as original which is a plus.

I used the bit to create 8 drawer faces. Worked great! Sharp edges and no tearing on the end cuts.